The St. Birgitta’s coif/cap (also, Bridget, Birgitte, Brigid), currently owned by the conservation department of Sweden’s Riksantikbarieambete (National Heritage Board) is attributed to the fourteenth-century century Swedish saint of that name. The original linen cap was at some point, most likely in the sixteenth-century, covered with silk taffeta which has since been removed by the conservation department. According to the article in Clothing and Textiles the linen has not been carbon dated, so while it most likely dates to the 14th century, the exact age is unknown. 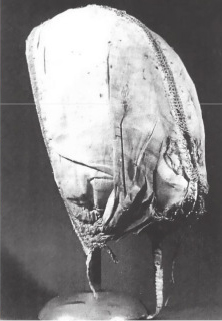 The original linen cap is two halves joined with a complex herringbone stitch similar to a modern faggoted seam, from the front edge to about 2 inches above the bottom edge. The bottom edge is then gathered into the binding strip that runs across the front edge and then continues on as the ties that help to secure the cap on your head.

Images of similar looking caps can be found in many 13th and 14th century manuscripts. While most images of women wearing only a cap during the day appear to be servants, it is not inconceivable for many of the upper class women to be wearing one under their wimple and veil as there are also images of women sleeping in what appears to be a similarly shaped cap.

Through experimentation I, and many women that I have talked to, have discovered that fastening the wimple and veil to the St. Birgitta’s cap does help everything to stay in place far more easily and comfortably, for hours at a time.

This pattern depicts the approximate size needed, in most cases, for short hair.

Measure from temple to temple across back of head. Be sure to put your hair in a loose bun first if you have long hair. Divide this measurement by 2 as well, this is B-C (ex. 17”/2=8.5”). I have an average sized woman’s head and longish hair, about waist length, and these are the measurements that I use.

Measure out a rectangle that matches your measurements and round out the top corner between A and B. Then add seam allowance along A-B, I suggest 1/2”. A-C and B-C will be encased inside of the band that goes around the front edge and do not need seam allowances.

You will need two of this piece, one for each side of the head.

Multiply your head circumference by 3 (ex. 23”*3=69”) and then add an extra inch or so for seam allowances. For a 23” head the band should measure 2” by at least 70” long, I will often cut out two pieces the width of the fabric, which means that I usually end up with a finished piece a bit longer than 70″. You will typically want the band to be 2” wide to accommodate for seam allowances. Sew your two lengths together so that you have one really long piece. Press band in half along its length. 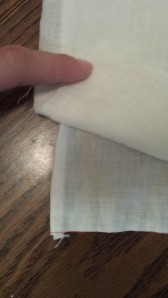 Split at bottom edge of cap.

Sew from point A to 2” above point B and finish your raw edges with a felled seam on each side. You can do this a few different ways depending on what you want as a final result. If you want an exact copy of the original cap then you will want to first finish the A to B curve in the same way that you would finish a hem edge and then sew the two pieces together using a modified herringbone stitch or try one of the stitches at the previous link on faggoting. If you just want to sew it together and then finish the seam edges that is also an option, either hand or machine sew your two halves from point A to 2″ above point B and then roll both seam edges away from the seam and sew them down to finish. Alternately you can serge your edges first and then sew the cap halves together, I have done this when I was in a hurry before.

Next, run a gathering stitch from B-C on each side and gather appropriately for your head shape and amount of hair. I find that gathering the bottom edge into about 1.5″-2″ usually works best.

Join both strips to create the band.

Join the two halves of the band and press open the seam allowance, right side.

If your front band is in two pieces then sew the two pieces together along one of the short ends and press the seam allowance open. 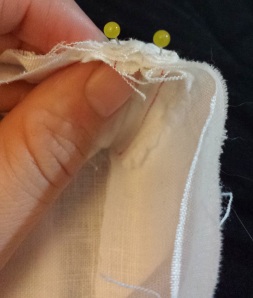 Pin the gathered bottom edge into a 2″ space on the front band.

Starting at point A pin the mid point of the band to the cap, right sides together. Pin the band along the front edge of the cap until you reach point C. At point C you will want to pin the gathered portion of the cap to the band as well into a 2″ space, this may take a bit of working with the fabric to get it to line up. Repeat this pinning on the other half of the cap.

Fold the band back on itself to encase the front edge of the cap, and use a slip stitch to finish.

Sew the other half of the band to the cap and then sew the band together along its length keeping your raw edges inside.

Finishing the band with a whip stitch

The last step is to put the cap on and wrap the ties around your head to measure how long the finished length should be. Pin at the point where the ties meet and then sew them together so that all raw edges are hidden. Alternately, and this is what I normally choose, you can not sew your ties into a continuous loop and instead have two tie ends that are pinned together and therefore slightly variable in length. Since I use my St. Birgitta’s cap almost exclusively to hold my veils in place I’ve found that with some of the hairstyles, for instance giant braided buns on the sides of my face, that sometimes I need the ties to be a little bit longer or shorter. 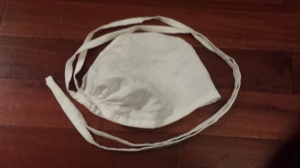 You now have a finished cap!

Check back soon for a Veils and Hairstyles tutorial!

4 thoughts on “How to make a St. Birgitta Coif/Cap”