Prompted by a friend’s question online I realized that a few of the research review and retention methods that work for me are not typically taught in school. A brief background, I have a Masters in Costume History, but struggle with moderate dyslexia and am a visual kinetic learner, this means that the things I learn the easiest are things that involve muscle memory, in other words reading and writing have never been my strongest subjects. I have noticed that people will often associate intelligence with the ability to learn standard research methods, when in fact they need to learn alternative research methods.

END_OF_DOCUMENT_TOKEN_TO_BE_REPLACED

I was partially inspired to put together this class handout because a friend is organizing a 14th century themed event, Road to Rouen, in June of 2020. I am very much looking forward to this event! 🙂

Assembling a basic soft kit for most time periods can be pretty simple, but I have noticed that sometime people are distracted by things that do not help to distinguish the portrayal from a generic medieval person. While a basic hood and tunic can be used for many time periods, but varying the shape and hem length and adding a pair of hosen can give a more focused appearance. Additionally, changing up the fabric of the clothing, better quality fabrics or rougher quality fabrics, can vary the impression between a wealthy servant and a field worker. Often small changes that get overlooked can have a huge impact on your final appearance. 🙂 While I have focused this handout on 14th century clothing the basic points can be applied to most impressions.

END_OF_DOCUMENT_TOKEN_TO_BE_REPLACED

I think just about every blogger has something on eyelets and/or buttonholes, in part because they are a rather integral part of recreating historical clothing. Since I focus on late 14th century clothing most of what I have to say is specific to that period, but often applicable to other periods of history as well.

END_OF_DOCUMENT_TOKEN_TO_BE_REPLACED

The Zuparello is worn over the shirt and is considered a base layer garment similar to the pourpoint, in that it is often shown quilted and sometimes shown pointed to the hosen. It appears to have been a garment borrowed from the military tradition and worn in civilian settings, since there are many images of similar garments in both military and civilian images. 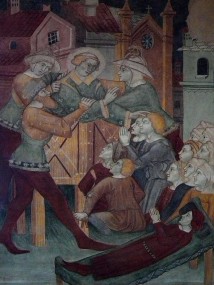 Imagery suggests that the zuparello would have been made from wool or silk.[1] Silk was chosen for the exterior of this garment because of the images from the Tacuinum Sanitatis showing quilted garments in the silk merchants’ shops. And because I found a beautiful gold silk soft taffeta.

Details of the gusset inserts that help with the sleeve shaping.

Since many of the images of zuparellos shows the garment as quilted I chose to quilt this garment. Additionally, based on my experience of making other versions of this garment I have found that it drapes much better when quilted.

The pages for woolen cloth in the Tacuinum Sanitatis do not show quilted garments, but seem to instead show the outer garment. Other images of the zuparello in more military settings, such as those in the frescoes at the Oratorio de Santo Stefano and one of the Tacuinum Sanitatis pages showing two men with swords, suggest that the fabric for those garments is more likely a worsted wool designed for heavy use. 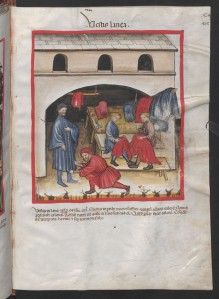 The buttonholes are sewn with a silk buttonhole thread using the squared buttonhole stitch common to 14th century clothing as in the images below. In the case of the sleeve fragment from the Museum of London (MoL), the buttonhole stitches are sparser that what is expected from a modern perspective, but when compared to Charles de Blois pourpoint buttonholes are created with a larger thread and closer stitches. A consideration with these two garments is that the Charles de Blois pourpoint was made for the King of France out of silk and the sleeve fragment from the MoL is a piece of mid-quality worsted wool. The effigy on the right also indicates squared buttonholes if you zoom in on the picture, the effigy buttonholes almost looks like welted buttonholes, but since the earliest examples of extant welted buttonholes date to the early 18th century, that is very unlikely, and it is more likely that they are trying to indicate a buttonhole like those on the Charles de Blois garment. 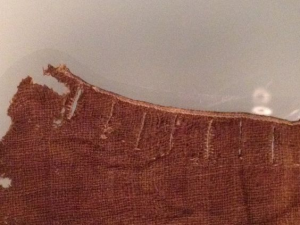 Detail of the stuffed buttons and buttonholes.

The buttons are self stuffed cloth buttons from the same fabric as the garment. This matches the style of buttons seen many of the extant garments such as those shown above. 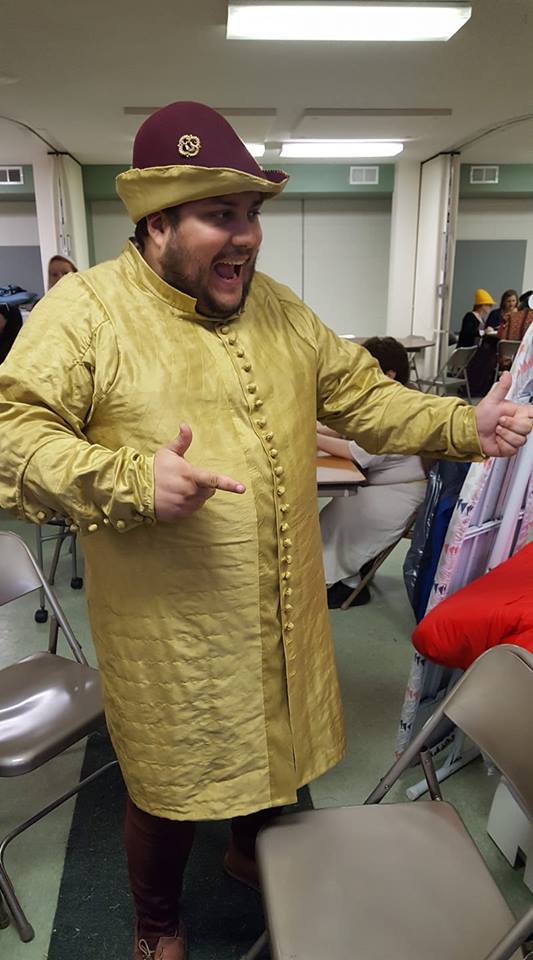 A very excited Luca in his new zuparello. It does need to be shortened to be at a more correct length, but was cut long for the competition to make sure there was some wiggle room on the length.

For more information about how I pattern for the Zuparello and Pourpoint go here.

[1] Tognetti, Sergio. 2005. “The development of the Florentine silk industry: a positive response to the crisis of the fourteenth century”. Journal of Medieval History. 31 (1): 55-69.

The pattens for this project are a thin leather design, like some found at both the Museum of London and in Shoes and Pattens, for walking on smooth dry ground.[3] These are made from two layers of 8 ounce vegetable tanned leather with a 8 ounce leather heel riser between the two layers, with both toe and ankle straps, of 2 ounce leather, to keep the patten on the foot.

The pattern was made by tracing the foot and then adding a short point to the toe. For the straps I measured over the toes and around the ankle to make sure they would fit over the hosen correctly.

Sole of the patten.

Side of the patten showing the layers.

Showing the extra layer for the heel riser between the two layers of the sole.

Christine Meek uses the Italian word pianelle for pattens in her article on shoes in Lucca, Italy, but in modern Italian pianelle translates to “tile”.[4] Since Meek does not provide an explanation for this my personal thought on it is that the original pattens must have looked like walking on a wood tile.

Patterns by me, construction by Joan della Torre.

Many of the images from late 14th century Italy show hosen that cover the much or all of the bum. These early joined hosen do not appear to have a cod piece to cover the front of the crotch and appear to point to either a belt or the zuparello.

Because of the very fitted nature of hosen some fabrics do work better than others, including twill worsted wool and other fabrics that naturally have more stretch. While it is possible to use other types of fabrics, it is more difficult to get the close fitted shaping of the leg without a fabric that naturally stretches.[1] 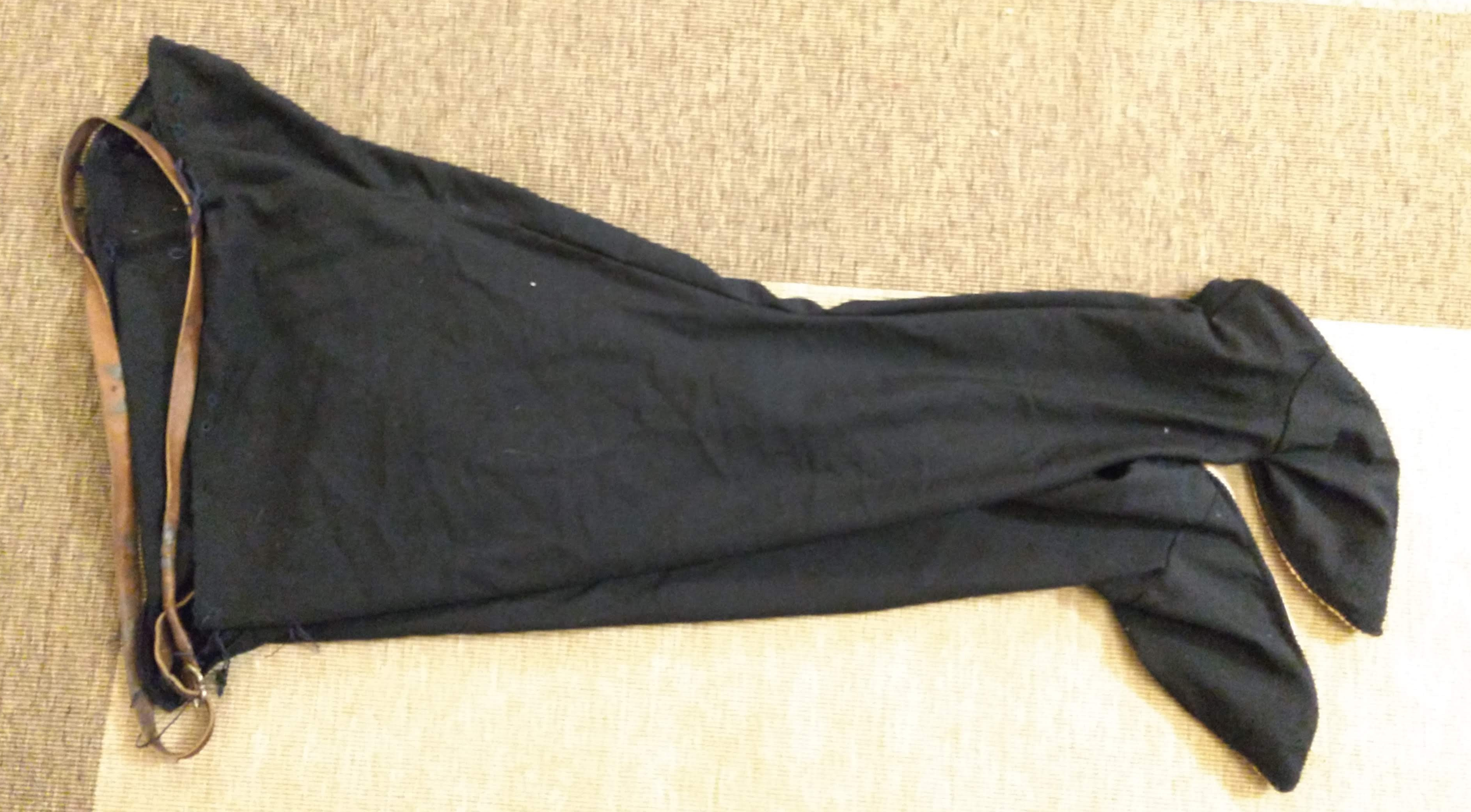 Hosen of wool twill attached to a braies belt.

In many late 14th century Italian images men are shown wearing their hosen without shoes. The reason for this is most likely because the hosen have a thin leather sole. References to this style of hosen can be found in household inventories from 14th century Italy and Christine Meeks discusses those references in her article.[3] 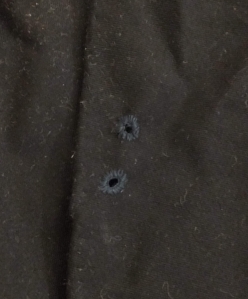 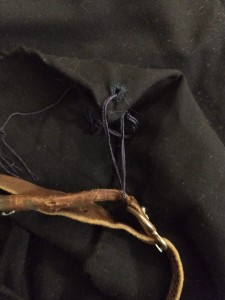 The points for these hosen are silk fingerloop braids with brass aglets on the ends. Fingerloop braids were commonly purchased for lacings and points and I have found that for clothing silk works best since it slides through the fabric without catching.[4] For heavier use, such as on armour I have found that the silk is too delicate and waxed hemp or linen holds up better.

Patterns by me, bulk of the sewing done by Avelyn atte Wode, leather soles finished by Joan della Torre.

[2] Newton. Fashion in the age of the Black Prince

The garments were largely based on images from the Tacuinum Sanitatis manuscripts.

The items we made were: 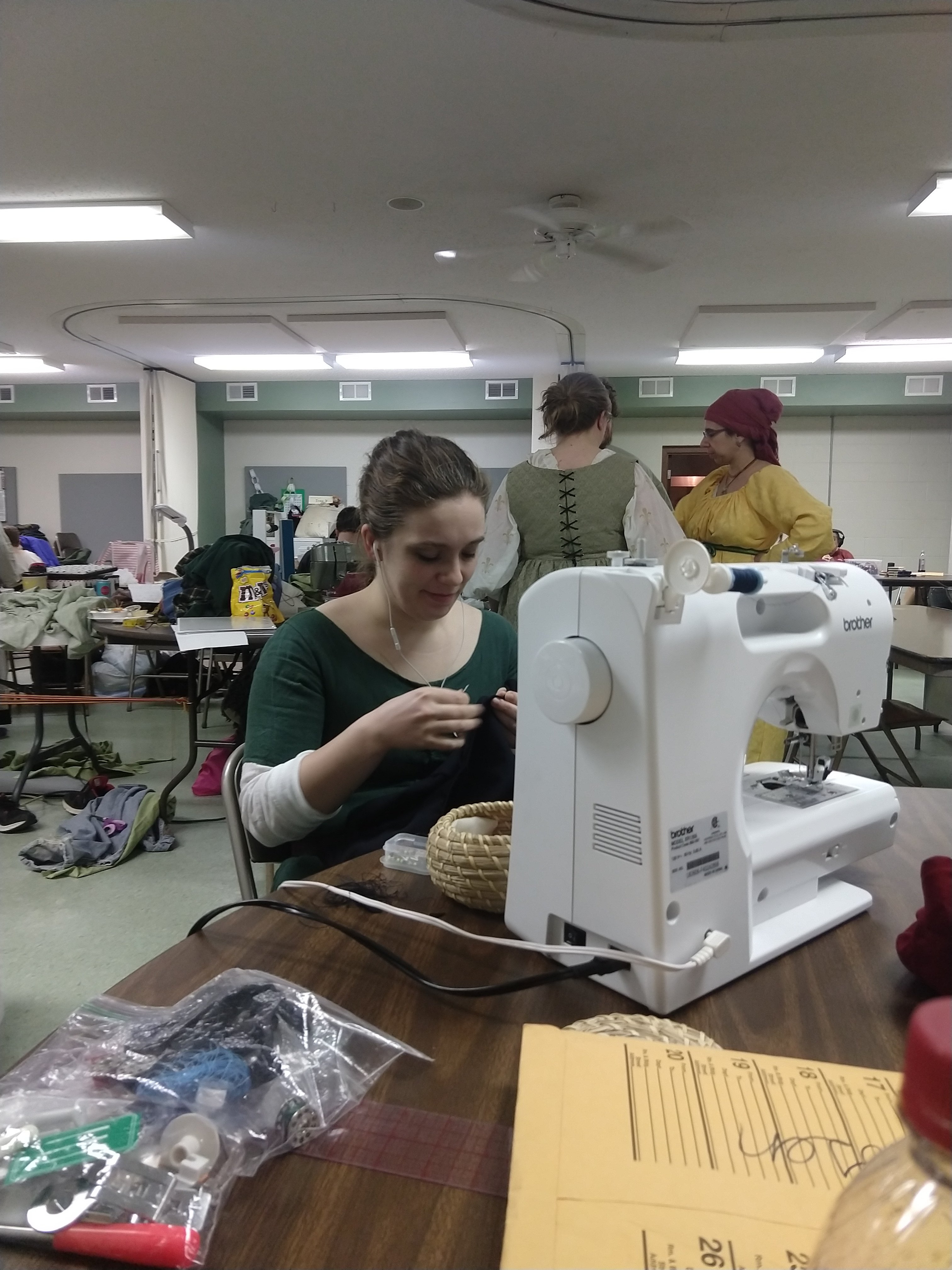 Quilted Zuparello (quilting and assembly) – me

Zuparello (button holes and attaching buttons) – me, Valya, and Ursula

Before the event Derian le Breton made silver bezants to be used as embellishment on the Cote.

While exhausting, the whole experience was also amazing, and would not have been possible without the amazing group of friends that decided they wanted to also be a part of this!

I will be posting more photos of the garments with the documentation over the next week. 🙂

Luca posted a video of our final garment presentation to Facebook. 🙂

Recently I started a new dress to replace my much loved and worn green linen working class dress that gave up at Pennsic last year. One of the things I loved with my old dress was how thin the fabric was and so I found a very thin wool suiting to make the new dress. It is a very pretty steel blue color that does not photograph particularly well. So far I’ve only sewn the godets and front facings to the front panels. 🙂

And of course I’ve decided to also hand sew this dress. 🙂

Flat felling on the front godets.

Putting on the front facing.

Sewing in the car makes the drive go faster, also, friends are sneaky. 🙂

Recently, at Pennsic 47, for a friend’s elevation I decided to make myself appropriate Norse clothing. After I asked my friend Evja for ideas and she pointed me to a lady’s review of the Køstrup dress (Thunem), I decided to try something new. Since I am a 14th-century clothing enthusiast, this was an entirely new realm of sewing and patterning for me: specifically, working with the much thicker wool thread to match the fabric and determining how much fabric I needed for the pleating.

I was working with a handwoven fabric, so I wanted to make as few cuts to the fabric as possible.  Thus, rather than using the trapezoid shaped patterns that are often seen in reconstructions I chose to do two rectangular patterns with inset godets in the side seams. I have been quite happy with the visual effect of this patterning choice. END_OF_DOCUMENT_TOKEN_TO_BE_REPLACED